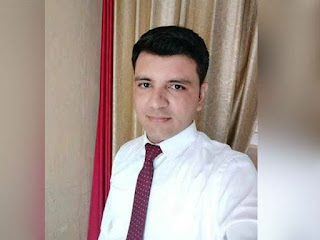 ‘Failures are the pillars of success’, and the story of Vijay Wardhan justifies every word of this phrase. Vijay Vardhan who secured 104th rank in UPSC Civil Services exam in 2018 failed in more than 35 exams before hitting the bull’s eye. This is a story for all those who have failed in an examination. It took him 5 attempts to finally clear the UPSC Civil Services examination and some 30 odd other government examinations.

Vijay’s journey started in 2013 when he came to Delhi after completing his engineering in electronics and communication from Hisar, his hometown. He came to Delhi to prepare for UPSC Civil Services exam. It took him 6 years and numerous failed attempts to ultimately succeed in life. In these many years, Vijay appeared for more than 35 government exams which he was unable to crack.

In 2014, for the first time, Vijay attempted for UPSC Civil Services exam in which he failed. In 2015 he again attempted for the exam and cleared the preliminary exam but was unable to qualify UPSC Civil Services Main exam. In the following years, 2016 and 2017 he attempted for the exam but could not clear it. Determined more than even, he tried again in 2018 and this time he carried it through. From clearing the UPSC Prelims to mains and then the interview, Vijay Wardhan kept clearing hurdle after hurdle. The end result, he was victorios and secured 104th rank in the UPSC CIvil Services 2018.

But it was not only the UPSC Civil Services examinations. He attempted a total of 35 examinations but remained unsuccessful. Vijay appeared for various Grade A and Grade B government exams. The list included UP PCS, Haryana PCS, Punjab PCS, SSC CGL, LIC, NABARD, ISRO, Haryana Excise Inspector, RRB NTPC, RBI Grade B. In most of these exams he cleared the prelims but was unable to crack the main exam or interview. At times it so happened that he even failed in the medical exam or in the document verification process.

The list of failures may crack any person and force them to give up on their dreams. But Vijay epitomised the adage – what does not break you, makes you stronger. His dream in site, Vijay continued to strife for his dreams and on April 5 his hard work and dedication paid off. Vijay Wardhan not only cracked the examination, he also secured 104th rank. Vijay Wardhan has opted for Indian Police Services.

Vijay’s story is a story of courage, determination and never say die attitude. In today’s world, with high competition, it is stories like these that show the beacon to the many who give up after failing. He truly epitomizes that failiures are the first steps to success.