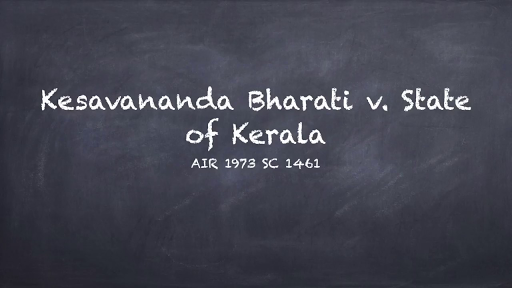 For Prelims: Background and highlights of the judgment.

For Mains: Significance and relevance of the judgment.

Context: Exactly forty-seven years ago, on April 24, 1973, Chief Justice Sikri and 12 judges of the Supreme Court assembled to deliver the most important judgment in its history. The case of Kesavananda Bharati v State of Kerala had been heard for 68 days, the arguments commencing on October 31, 1972, and ending on March 23, 1973.

Background of the case:All this effort was to answer just one main question: was the power of Parliament to amend the Constitution unlimited? In other words, could Parliament alter, amend, abrogate any part of the Constitution even to the extent of taking away all fundamental rights?

What constitutes the basic structure?

The Constitutional Bench ruled by a 7-6 verdict that Parliament should be restrained from altering the ‘basic structure’ of the Constitution.

The court held that under Article 368, which provides Parliament amending powers, something must remain of the original Constitution that the new amendment would change.

The court did not define the ‘basic structure’, and only listed a few principles — federalism, secularism, democracy — as being its part. Since then, the court has been adding new features to this concept.

The ‘basic structure’ doctrine has since been interpreted to include the supremacy of the Constitution, the rule of law, Independence of the judiciary, doctrine of separation of powers, federalism, secularism, sovereign democratic republic, the parliamentary system of government, the principle of free and fair elections, welfare state, etc.

What do critics say?

Critics of the doctrine have called it undemocratic, since unelected judges can strike down a constitutional amendment.

At the same time, its proponents have hailed the concept as a safety valve against majoritarianism and authoritarianism.

Outcomes and implications of the judgment:

If the majority of the Supreme Court had held (as six judges indeed did) that Parliament could alter any part of the Constitution, India would most certainly have degenerated into a totalitarian State or had one-party rule.

At any rate, the Constitution would have lost its supremacy.

If Parliament were indeed supreme, these shocking amendments would have become part of the Constitution.

No comments to show.